Dog Park in Indooroopilly Brisbane that’s not a Dog Park 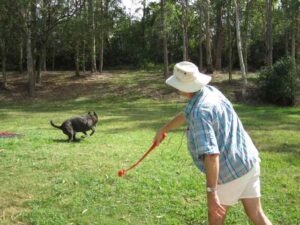 What makes a dog park a dog park?  Is it the fence and gate?  Or the poo bag dispenser and bins?  Perhaps it’s the Council sign listing the rules and regulations or could it just be the gang of dogs congregating in a focused area with mischief on their minds?

I suspect for Council Dog Parks and Off-leash Areas it’s a mixture of all of these things, as well as a mention on Brisbane City Council’s website in the Dog Park section.  But I’ve found an area that sits right next door to a Council Park – that’s interestingly not a designated dog park -, which seems to attract an array of dogs on a daily basis, morning and night, for off-leash frivolity, which has none of these aspects.

Robertson Park in Indooroopilly is a delightful and grand space for the whole family, puppy included.  A small car park sits off Indooroopilly Rd, where you’ll find the main entry, a half court basketball area, toilet facilities, picnic tables, wood BBQs and, with a hop, skip and a jump (if you’re an energetic child) a child’s playground.  A drain runs through the park, with bridges at each end in order to get from one side to the other.  Linking the bridges is a cement path.  Dotted along the path and interspersed amongst the beautiful flora are various fitness apparatus.

Dogs are certainly welcome in this park and are often seen, on-leash, taking their owners for a walk, or sometimes enjoying some free play (not sure if this is permitted) running wildly amongst the trees or playing in the drain.  However, it is next door to the park where the real freedom begins. 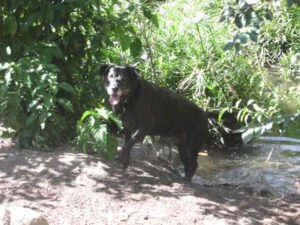 I’m not sure if it is actually permissible but there seems to be an understanding that dogs can play off-leash on the Indooroopilly High School oval, which runs into Robertson Park and parallel to Lambert Rd.  There’s a fence running along the outside perimeter of the oval with an open space offering access into the park.  There is also no barrier between the school building and the oval, which means the dogs can run and run and run, hence any dog that is released must be well trained to come when called.  Being a school oval there’s a few hindrances to unbridled play, like after school and weekend sport, cricket nets and pitch and a long jump pit.  There are no seats and the trees are restricted to the edges of the space, thus it is exposed and hot.  But in terms of a space for fetch I think the Indooroopilly High oval would be hard to beat.

However, given that it is actually a school I assume access is restricted to non-school hours.  Also, whilst there should be an understanding that all poo in any area needs to be picked up and disposed of responsibly, it is even more paramount on school grounds as children need to be able to play without issue.  Thus, poo bags and a bin are located as you enter Robertson Park from the School oval.

So whether you look for a dog park on the Council website with fences, gates, seats and shade or drive around until you locate a large, open space, with cleanly shaven grass it is clear that the definition is fluid.  What is clear is that no matter where you release the hairy beast for a run and roam the only absolute is to pick up where they poop.